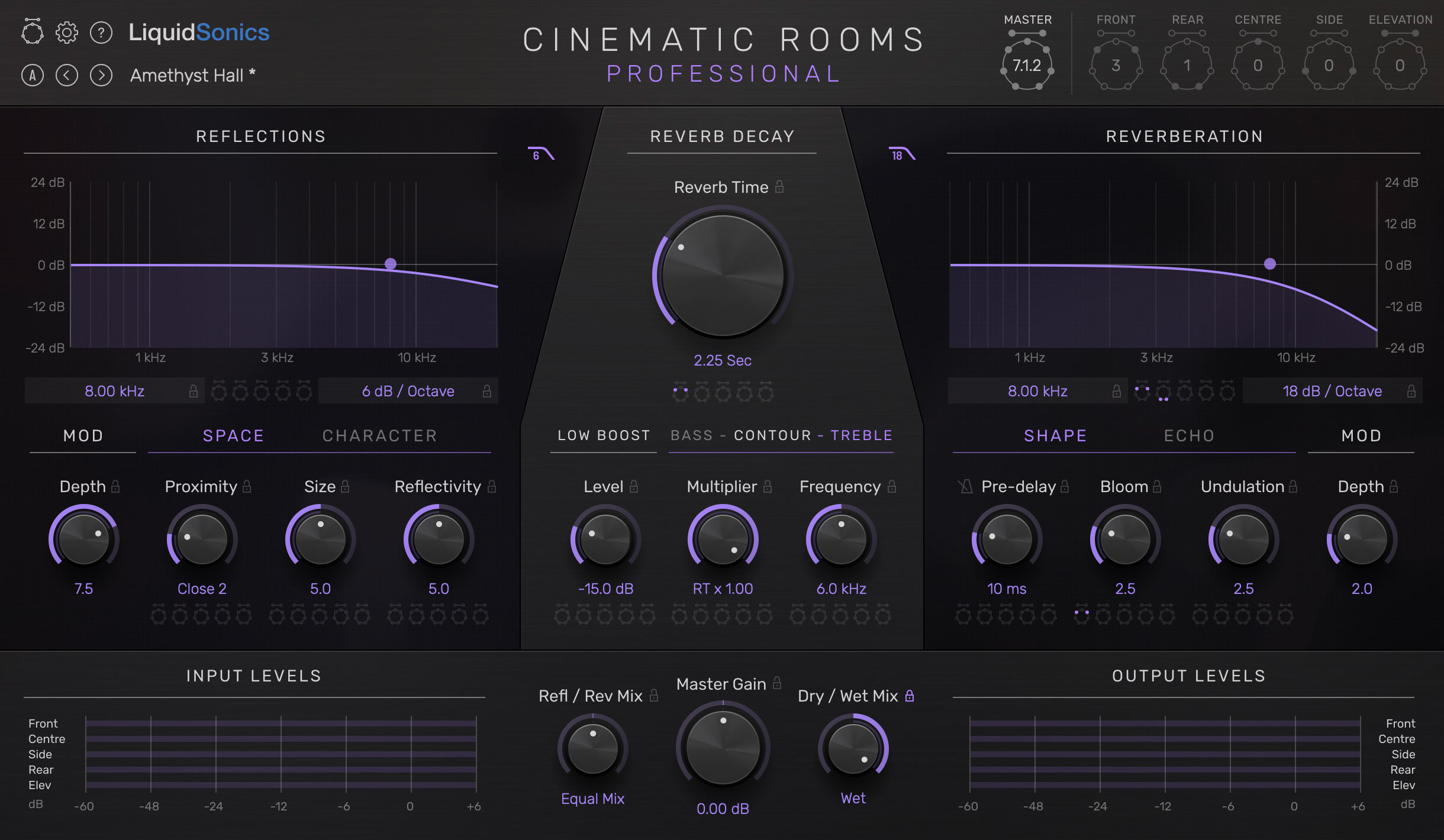 LiquidSonics’ Cinematic Rooms is a surround reverb processor for AAX, AU and VST


It looks, really interesting... specially with Alan Meyerson's input into it. Maybe time to try out the demo!


Cinematic Rooms Professional
For the most demanding score mixing and post-production workflows, the Professional edition is the ultimate room simulator combining the latest in modulated constant-density reverb technology with an interface tailored to the demands of modern surround production.
Surround Editing Planes
Cinematic Rooms Professional provides you with the controls you need to able to precisely control the reverb within the surround field. Optionally deviate parameters in the front, rear, side, centre or elevated planes relative to the master preset, for example:
As all surround plane deviations track the master controls any changes to the master preset immediately propagate throughout the space, and are clearly visible by the surround editing indicators beneath every parameter.

Superior Pan Tracking
Advanced control of crossfeed allows you to accentuate or suppress the amount and character of reverb propagation into the surround space.
Unlike other surround reverbs that typically create a homogeneous wash of equal magnitude in all channels, Cinematic Rooms’ crossfeed controls allow you glue the reverb to the source of the action whilst tracking panning very naturally with additional filtering, level and delay control.
OP

It seems it was already posted:

For those of you who are fans of Seventh Heaven or their Plates reverb, seems they have a new Rooms reverb (Stereo, LCR, Quad, 5.1, 7.1 – 7.1.6) with some intro pricing. https://www.liquidsonics.com/software/cinematic-rooms Cinematic Rooms Professional $249 - normally $399 from July 1st 2020...
vi-control.net
V

Garlu said:
It seems it was already posted:

For those of you who are fans of Seventh Heaven or their Plates reverb, seems they have a new Rooms reverb (Stereo, LCR, Quad, 5.1, 7.1 – 7.1.6) with some intro pricing. https://www.liquidsonics.com/software/cinematic-rooms Cinematic Rooms Professional $249 - normally $399 from July 1st 2020...
vi-control.net
Click to expand...

No worries - I'd say keep it here as an announcement (I should've posted it here), and the one I did in effects can be about application/use of the reverb. But I'm no admin

Wondering if it brings anything special to stereo only.
V

In my extensive 2 or 3 minutes of use so far earlier in the morning, it seemed like another character reverb - for stereo. I don't have the means to test surround sound. That's probably the key differentiator.

I spent a lot of time reading about this product today, after the email announcement (there are no audio demos, but you can download a product demo if you like). I think I finally figured out that it's an algorithmic reverb with no impulse responses and that it is thus different from Luscious Plates and Seventh Heaven plus Illusion, as the latter two are hybrid reverbs that use IR's.

Initially I thought it was just a Room Reverb, then I learned it has Hall, Chamber, Ambient, and Spaces. The latter two categories are of particular interest to me, so this is a likely buy (but no rush, as long as the discount isn't short-lived).

What is definitely the case after careful review (especially the detailed discussions involving beta testers on GearSlutz today), is that the differential between Standard and Pro is worth it, and has nothing to do with Stereo vs. Surround as both versions are on par in that regard. People are saying that their loyalty prices are under $70 for Standard and under $130 for Pro.
Last edited: Jun 2, 2020

There’s a great thread on Gearslutz has a bunch of the Cinematic Rooms beta testers they are discussing the differences of the different versions also many of them are using this 2 channel.

“Ok, just checked -- there are three categories in Pro not in Standard -- nonlinear, post, and studios.

In addition to that, the Standard categories (ambiences, chambers, halls, rooms, spaces) has about 2x as many presets in Professional vs Standard (eyeballing it, don't hold me to an exact count )

All of these presets can be loaded in stereo. I don't work in surround.”

Someone posted a nice demo at GS today, that runs through a bunch of settings. It sounds very natural and lush without any noticeable artifacts of digital processing. Very smooth.

Looking forward to trying this on some solo violin recordings asap. Will report back but I'm sure its awesome considering those testimonials. Really appreciate the 14 day free trial!

Edit: LOVE this reverb. I only work in stereo but it was fantastic for placing my solo violin in a beautiful realistic space. Sounded great on visceral sound design for trailers too that needed just a touch of room.
Last edited: Jun 4, 2020

Bought, installed, and authorized. At 2am, I'm a wee tired for trying it out.

I got the double-discount, and received clarification that having Lustrous Plates via the Slate Everything Bundle does not qualify for a third discount coupon. Even so, I got it down to $144.
Last edited: Jun 3, 2020
You must log in or register to reply here.