Omnisphere is *the* library for ambience / atmospheres.

If you don't mind using Halion of the free Halion Sonic SE, I can really recommend Revolution from Sample Fuel: https://www.samplefuel.com/revolution
And I support fully the words of @shponglefan about Omnisphere 2!

With my own company I recently released Universe, a Kontakt 6 library which might worth checking out maybe 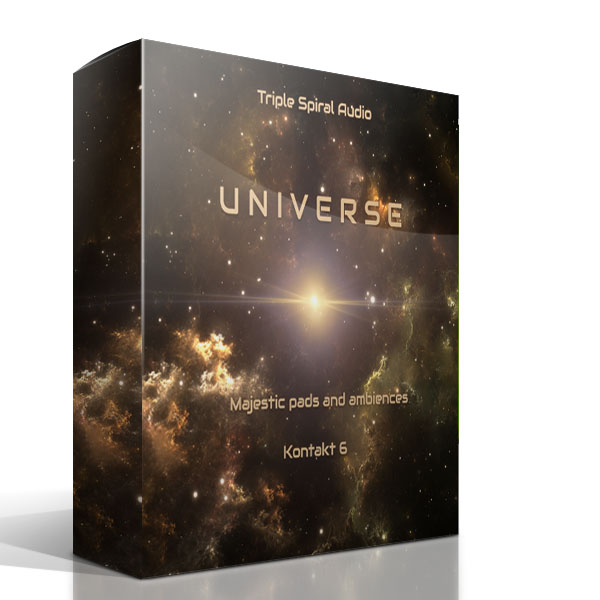 Universe is a new library by Triple Spiral Audio with the following kind of sounds: pads, ambiences, arp’s, loops, motions, shorts, distorted sounds and soundscapes. The sounds range from ma…

+1 on Omni but are there any votes for Absynth?

kgdrum said:
+1 on Omni but are there any votes for Absynth?
Click to expand...

Absynth is actually very good for this. Omnisphere will always win for sheer number of presets, but it can very creatively stimulating to play with various synths.
S

What about the new Elysion?

Lunaris by Luftrum I quite enjoy for spacey pads.

Sorry for the inconvenience

Xosphere and CinemorphX come to mind as well from Sample Logic.

Or put anything through Micron Cascade!

It's not talked about too much but I like Impact Soundworks Sonic Forest and Sonic Ocean.
Another one that I don't hear much about that I really enjoy is Wide Blue Sounds Eclipse and Orbit.
R

Iris 2 is good for this too.
K

have the same question if that refers to Output Rev and you are only looking for reversed stuff ?

I have no clue for that cause I dont use, otherwise the market for

is nearly endless and I wonder if there is already a list somewhere in the forum (would wonder if not).

Apart from the already mentioned it depends if you are looking for an "all included" version like Omnisphere or more for something special and "exclusive". For the second I would add Triple Spiral Audio (jaap was to shy to mention it seems

), the stuff from Frozen Plain (now available without kontakt as a new vst version and all libraries to be updated for that engine) and of course the really beautiful and relaxed stuff from SAS where something new is coming these days too:

Hey There, so we're back and I am proud to announce the first installment in our Metamorpha series: Allmosphere! Metamorpha is basically a series of small sample libraries, either created from original recordings of a bigger library, which are then turned into something totally new and...
vi-control.net

I think I could go on the whole day but as this is so crowded might help if you could go a little more specific (for example does this include the BOC - Boards of Canada - stuff which would be enough to fill a thread).

I had really fun and found lots of treasures with the new vst rack version from Reason. Apart from the already included hundreds (if not thousands...) of presets I yesterdy bought this:

Super deal: 93% discount - you save $383! Create new, alien worlds with dramatic soundscapes. Sculpt the soundtrack to nightmares and daydreams. Push the boundaries of cinematic composition. The Cinematic & Atmospheres Booster Pack includes the tools to stimulate new sonic ideas and push your...

which has so much great athmospheric ambient stuff (even if years old mostly) and I really love the combinator idea from reason where you have sequencers, effects evrything included for your tweaking.

i have tons of ambiance / atmos libraries and synth soundsets. but at the end of the day i always use omnisphere.

Why Not Ethera Evi 2.0 or Ethera Gold ? This stuff and many more.

dsblais said:
Absynth is actually very good for this. Omnisphere will always win for sheer number of presets, but it can very creatively stimulating to play with various synths.
Click to expand...

Omnisphere has a reputation of being a preset machine, but it's got a pretty deep synthesis engine underneath the hood.
U

Dandezebra said:
Or put anything through Micron Cascade!
Click to expand...

+1! Or the amazingly awesome vst version of Paulstretch.

Wow! got a lot of research to do! thanks for all the suggestions!

My personal favorites are "Sphere" and "Mystic" from Exotic States, "Granulate 2" from Fracture Sounds, all the stuff from Sound Aesthetics Sampling and FrozenPlain and, of course, "Enigma" and "Earth" from Spitfire as well as the Stephenson Steam Band content of the Albion series.

"Slow" from FrozenPlain is on my radar for a long time now; this is the only of their libraries I didn't buy thus far due to the relatively high price and a small discount when on sale. But recently, I've found out that I have quite a few reward points at Audio Plugin Deals so I'll take this opportunity to finally make the purchase. Really looking forward to it!
You must log in or register to reply here.